Bulletin Board of Bad Behavior
https://bb.paxacidus.com/

by mccutcheon
http://www.manchestereveningnews.co.uk/ ... attle.html
by marky
Yeah I heard about this. I was surprised how well he seemed to cope with it. What a guy. Anyway I just have this feeling he's going to come through it and I don't know why, so I hate to sound nonchalant about it, but that's how I feel. He'll make it.

In other news I actually did find one last Martin Hannett record that had slipped by me before...a 10" by Pauline Murray & Invisible Girls that has a version of "Dream Sequence" (called "Dream Sequence 2") that isn't on the full length CD. I've never been crazy about Pauline's voice but Hannett does some nice production trickery on that, including purposely distorting her voice once and then quitting, just to make you think you're hearing things. Another thing was I had a dream that I spent a whole night hanging out with Martin Hannett. It was when he was skinny and all and that mother fucker was crazy. I mean as crazy as he comes across in the 24 Hour Party People movie. It was a good dream, though.

Here's what the cover looks like. You can look it up on Amazon. It comes out March 1st. 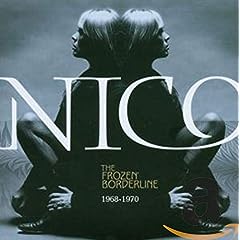 by marky
Haha! Oh my god I just realized Amazon try to suggest that you buy this along with some John Cougar Mellencamp album!!! Hahahahah I FAIL to see the correlation, man!!!
by Sloth
Now ain't that America
by marky
Man, I would have loved to hear Nico's drugged-up Germanic acccent covering some Mellenasswipe songs. I mean that would have been the shit. Just picture her singing about the Pink Houses, man. She could have rescued those songs.
by Sloth
That Jack and Diane song is alright.

Maybe Nico could make Diane a dominatrix and whip Jack's balls behind the shady tree.
by Tommy Martyn
Absolutely classic Wilson. Name dropping his celeb friends, his dead inspirations and his place in the grand Mancunian scheme of things. Then he shamelessly thanks most those that get ignored. I hope he gets better, he truly is a northern treasure.
by Tommy Martyn
Hey Marky, the queen will be working in England for a week starting this saturday. Stand by your phone. I'll be locked down with the little bastards 24/7.
by marky
Tommy! I was just going to call you right now because I found out there are pictures of John Cooper Clarke in the new MOJO magazine!!! It has Ian Curtis on the cover and I thought "oh yeah right, they're just trying to cash in again, I won't buy it unless I can find something inside interesting enough" and sure enough my eyes widened to see JCC sitting next to an Artic Monkey in several photographs. The bugger is still alive!!! He wore a black shirt with white polka dots on, which I thought was well proper. Whatever that means.

I'm afraid to call you because it's 9:42 in Ohio and I fear it would be an inopportune time. Nevertheless I just bought two new CD's (by Led Zeppelin & The Police, if you must know) and am going to walk down to the pub very soon. I found a pub down the road (yes it takes me awhile to get there, but walking is good exercise) and they serve really out of the way beers. I'm not talking your garden variety budweiser, guinness, local brews et al, oh no. This is a whole different animal, trust me. It is worth the walk.

Also I have two other new CD's (to me anyway) by two post-punk era bands from Manchester: Diagram Bros. (who so far seem to be better than I initally would have thought) and Dislocation Dance (whom I really only care about the first two singles/EP's of). Both of these CD's are on LTM records, www.ltmpub.freeserve.co.uk I've memorized the URL by now. Beloved LTM records, bringing us reissues of good old fashioned Factory/Crepuscule stuff. May that label never die. Even if they also have a lot of European boring, twee horsewank along the way.

I finished Billy Bragg's book. It wasn't too bad. I like the way he ended it. I don't care what anyone says, Billy Bragg is a cool guy despite his taste in music or anything else.
by marky
Also, as I told Pixie already, I had a wine tonight called Pinot Noir, which strangely is a type of wine I've neither heard of before nor had, despite it being red wine. Anyway it was made by Michel Picard and WOW, that is the best wine I've had in over a year. No doubt.
by marky
Ack. It's even later in Ohio than I thought. I'm glad I decided not to pick up the phone after all.
by marky

This would be even better if Jack White starred in the video, now wouldn't it?
All times are UTC
Page 1 of 1